How Critical Race Theory is burning down the house 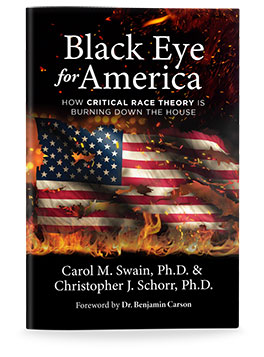 Carol and Chris expose the true nature of CRT and offer concrete solutions for taking back the country’s stolen institutions.

How Critical Race Theory is burning down the house

Carol and Chris expose the true nature of CRT and offer concrete solutions for taking back the country’s stolen institutions.

Carol Swain (Ph.D.) is an award-winning political scientist and former tenured professor at Princeton and Vanderbilt Universities. She is the author or editor of 10 books, including Be The People: A Call to Reclaim America’s Faith and Promise and The New White Nationalism in America: Its Challenge to Integration.

Christopher Schorr holds a Ph.D. in American Government from Georgetown University. His dissertation (“White Nationalism and its Challenge to the American Right”) considers factors that risk mainstreaming white nationalist politics in the United States, including Critical Race Theory. 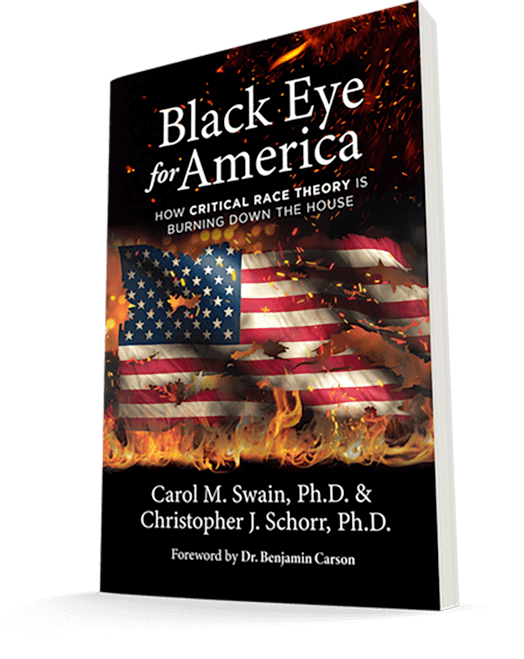 In schools and workplaces across the US, Americans are being indoctrinated with a divisive, anti-American ideology: Critical Race Theory (CRT). Based in cultural Marxism, CRT bullies and demonizes whites while infantilizing and denying agency to blacks, creating a deep racial rift. As Abraham Lincoln famously observed, “A house divided against itself cannot stand.” CRT aims to divide the American nation against itself and burn down the house.

In Black Eye for America, the authors expose the true nature of CRT and offer concrete solutions for taking back the country’s stolen institutions by:

What The Critics Say

TESTIMONIALS FROM AROUND THE WORLD

Black Eye for America clearly and cogently explains how and why the embrace of Critical Race Theory will bankrupt our nation both spiritually and intellectually. The authors dissect the purported intellectual framework of Critical Race Theory, exposing it for what it is: a warmed-over Marxism that substitutes race for class, but otherwise embraces the same failed ideas and assumptions of an ideology that sent 100 million people to their graves.

Dr. Swain and Dr. Schorr have done the world, and Americans in particular, a great service by writing this book. I look forward to people of good faith using the arguments within it to fight against the forces of destruction, and bring our country back into the light.

To fight evil ideas, a society needs people with intelligence and courage. Without the latter, civilization as we know it will simply disintegrate. That is why Black Eye for America is so important: the authors combine equal amounts of intelligence and courage. If you want to understand Critical Race Theory and most importantly, why it is the antithesis of every beautiful idea in the American and Western worlds, read this book.

Critical race theory is attempting to revive racial prejudice, perverting justice and using discrimination as a social weapon. Carol Swain and Christopher Schorr’s book is exactly what Americans need to understand the threat critical race theory poses to all of us—and to help individuals, families, and communities chart a course to the American Dream.

An Accessible Explanation of CRT

Carol Swain and Christopher Schorr have written the first truly comprehensive and lucid book describing the essence, history, and true intentions of critical theory. They explain the origins of critical race theory and its relationship to current politics, history, civil rights and traditional American values. They end by offering effective strategies for challenging and resisting it. Unlike most descriptions of critical theory that leave one simply with a new set of confusing words, e.g, Marxism, here all things are explained in cogent language with clear examples. I have taught critical theory in graduate classes for twenty years and this is the most accessible and thorough explanation of its tenets, historical effects, and its real intentions around the world. If you wondered if you would ever see an accessible explanation regarding critical theory or critical race theory, the search is over – Swain and Schorr have pulled it all together here.

MEET THE AUTHORS IN PERSON

Events to be announced soon

GET NOTIFIED ABOUT NEW BOOK RELEASES BEFORE ANYONE ELSE

Carol Swain Commentary: Critical Race Theory Is a Cancer on Our Educational System